What is a Single and Double Restaurant Booth? 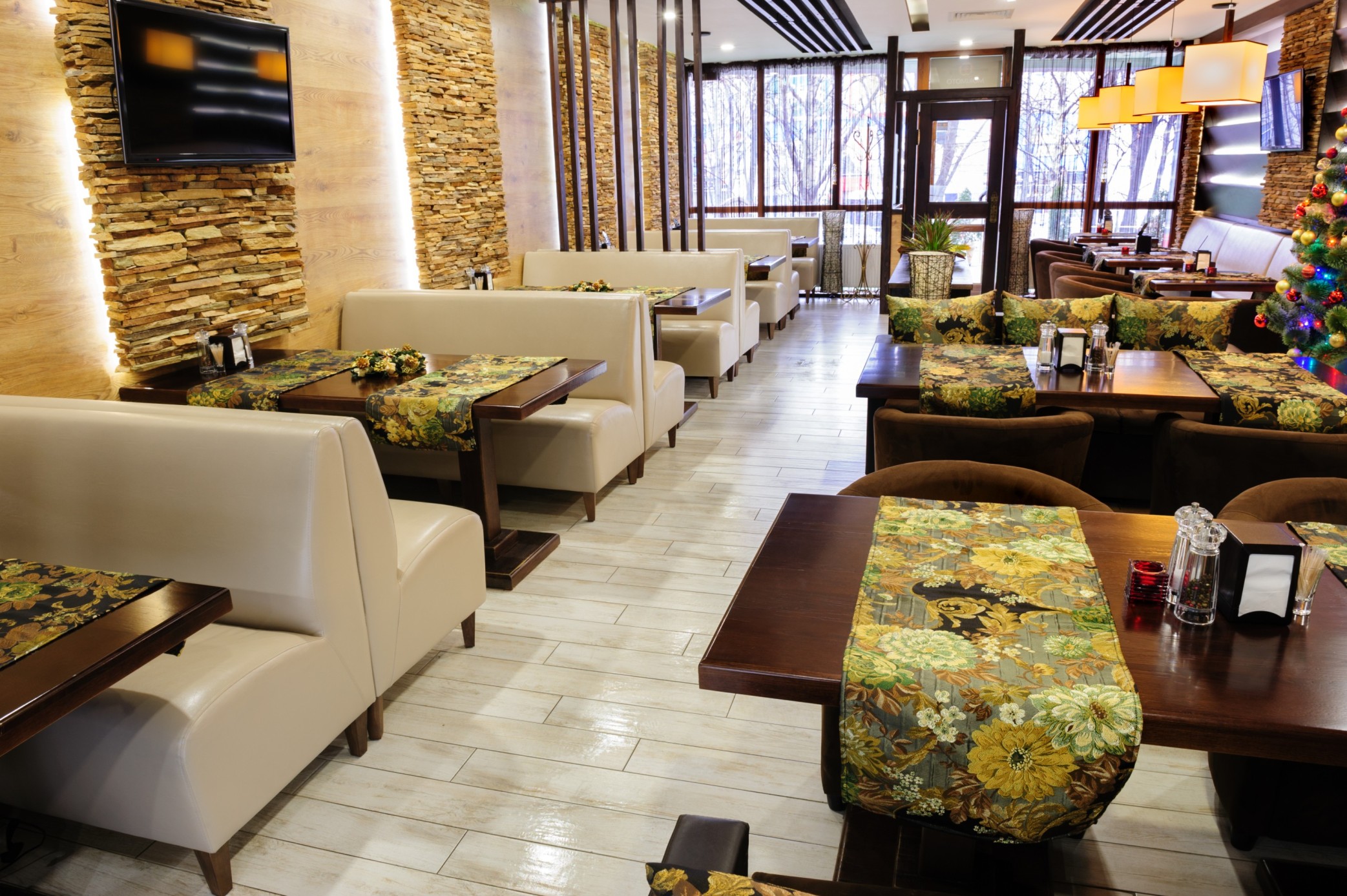 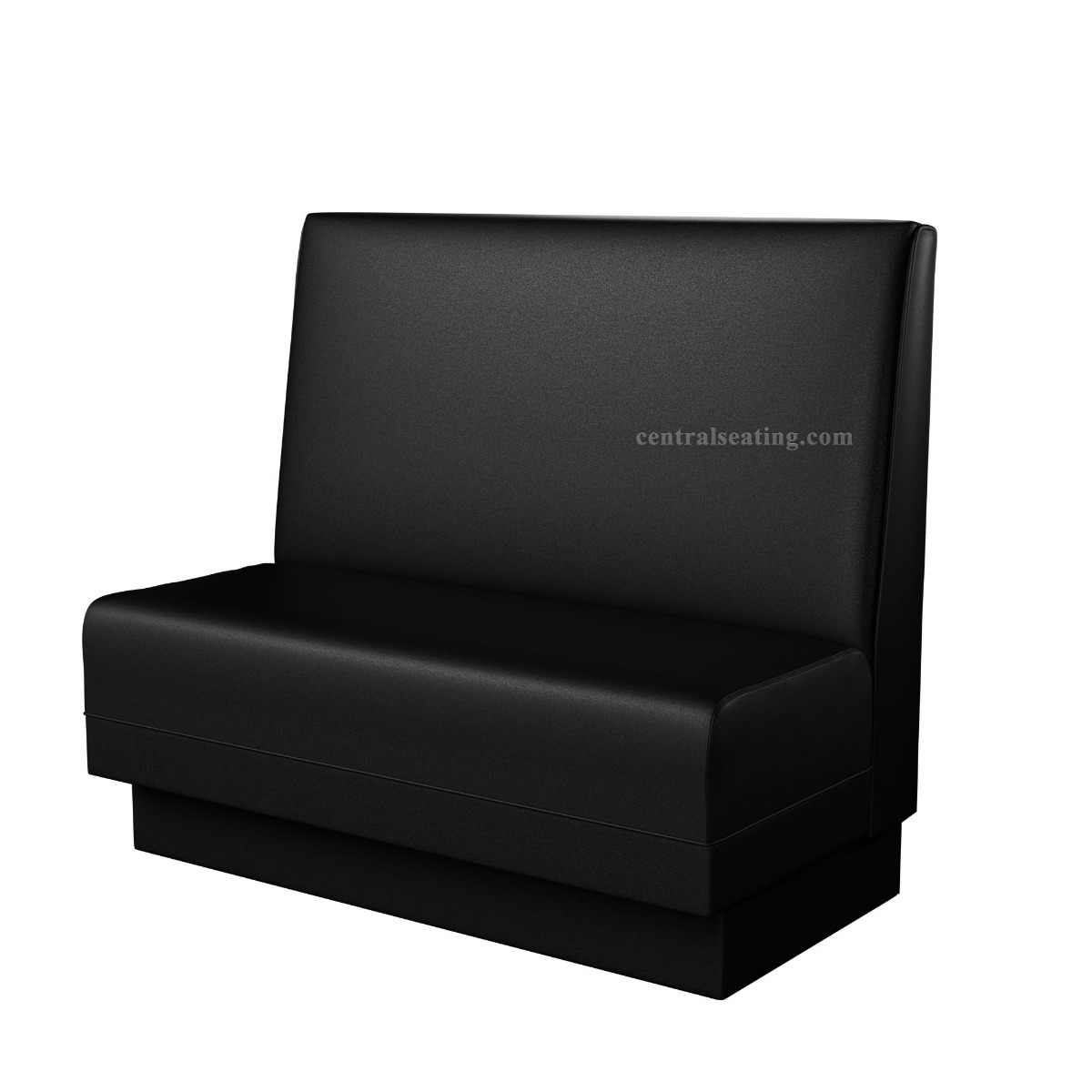 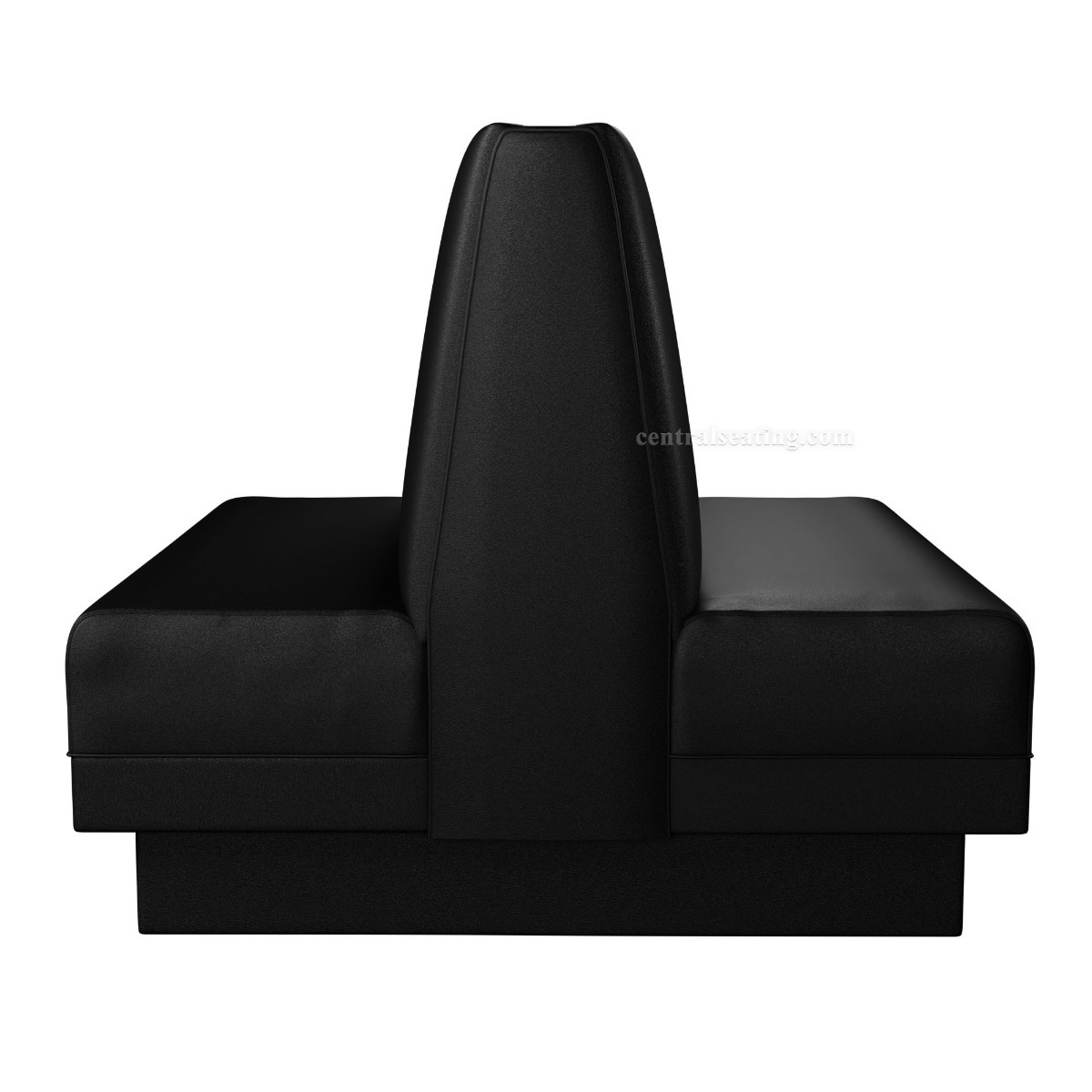 Double or Back to Back Restaurant Booth

Some doubles will not be able to fit though a standard door without removing the seats. The taller the booth is the more work will need to be done to bring booth inside using standard single door. If you only have a standard single door in your restaurant, sometimes it is recommended to avoid doubles and instead make all of your booths singles. Pushing your singles back to back to create a double is simple and making this change may not increase the cost as doubles are usually quoted the same price as 2 singles. 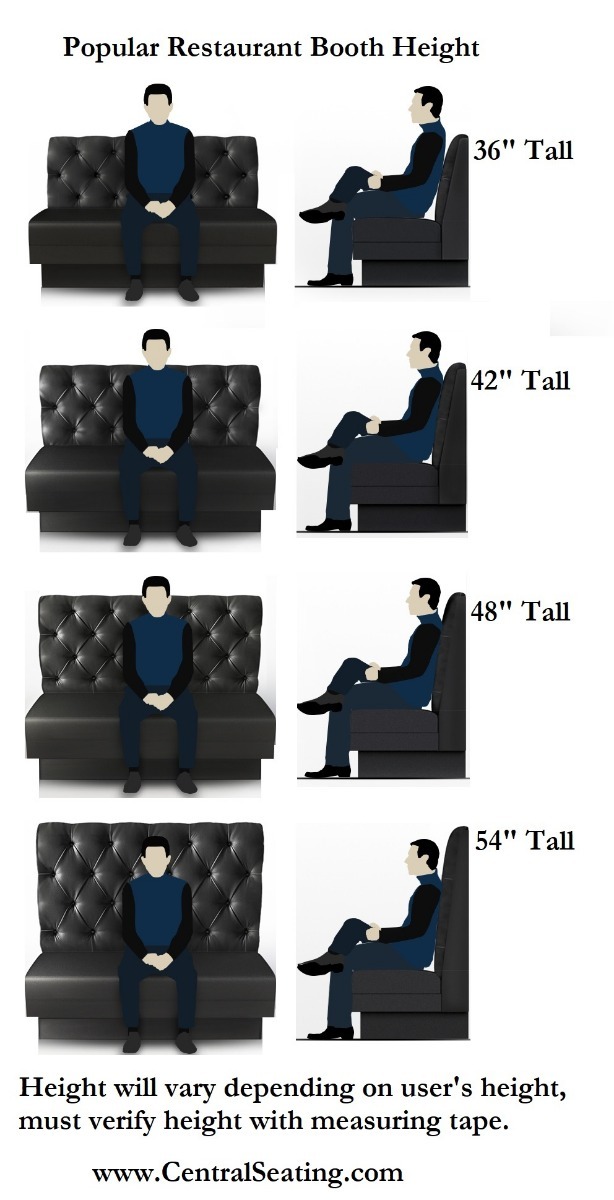 The most popular height on a single booth is 42” Tall. This height gives you semi-privacy but does not make the restaurant feel crowded. When sitting on this booth, the average person will have a 42” tall booth come to the beginning of their ear area. Anything taller and you can reach your eye site giving you maximum privacy.

Another very common booth height is 36” Tall. If sitting, the average person will have a 36” tall booth reaches their chin area. This is popular in small diners, residential booths and alike. A 36” tall may allow you to rest your elbow and will not make the are feel crowded at all.

When does a Single booth become a banquette? A single restaurant booth is made as short as 36” Long that sits 1 person and as long as a 72” Long that may sit 4 to 5 people depending on their size. Anything longer than that is usually considered a banquette which come in any length your seating area can fit.

Single booths are made to accommodate the available space. Sizes vary depending on the space available and sometimes the type of restaurant. 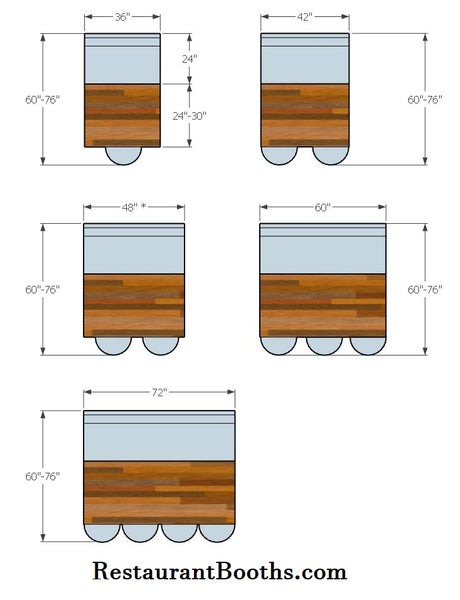 Some of the most commons Single restaurant booth measurements are; 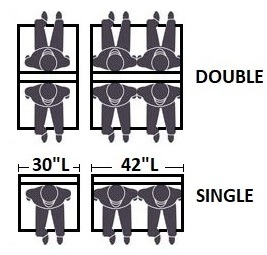 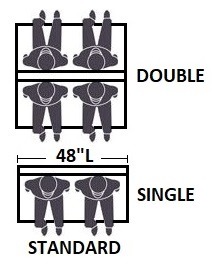 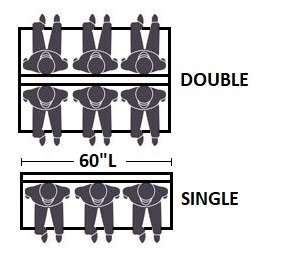 A simple booth combination will have two singles with a table in the center. If you want to know if a simple combination like this will fit in your area, a good rule of thumb is to make sure you have a minimum of 74" of space. This space will support 2 single booths with a depth of 24" and 1 table with a standard with of 30". It is customary for the table to overlap the booth seat by 2" on each side, making this a perfect fit. 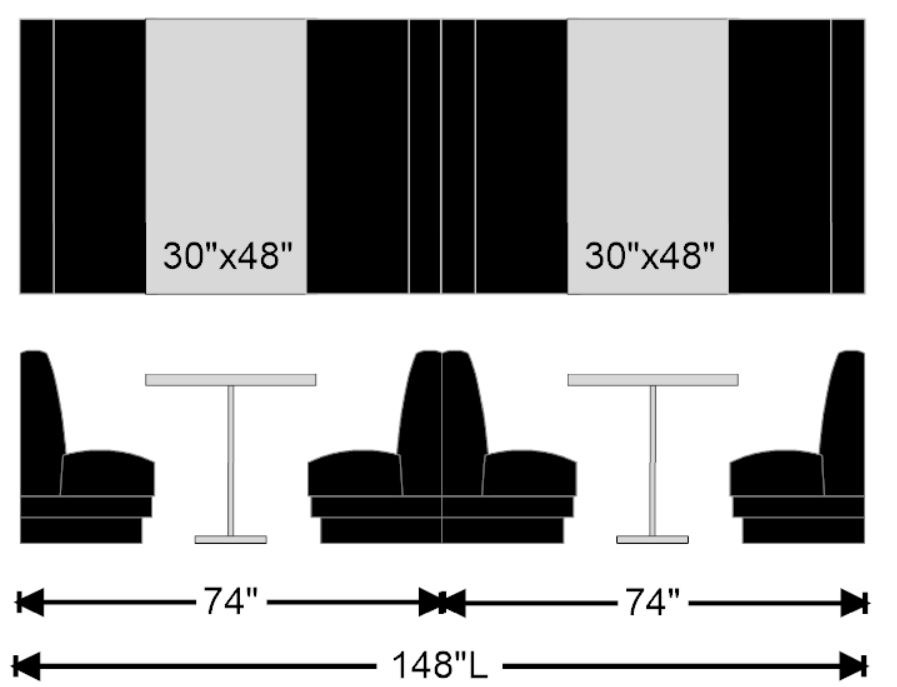 A standard setup is 2 singles and 1 double in the center. A row of booths like this with a total width of 48" wide will support 8 visitors and is very common in many kinds of restaurants including fast food and high end. 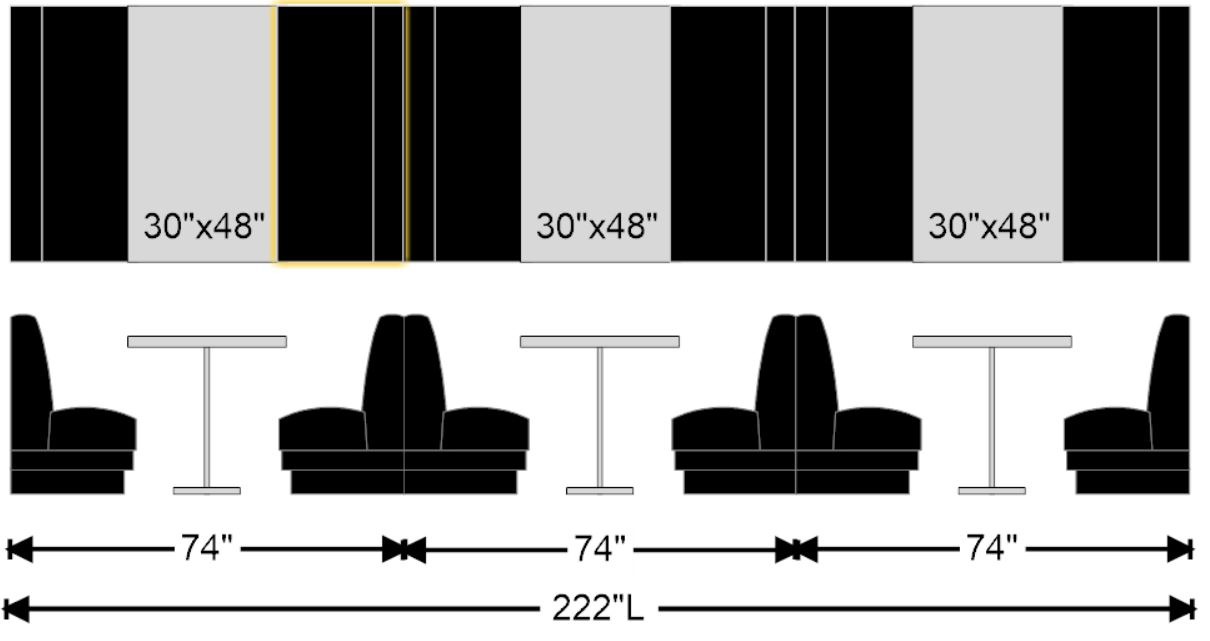 Have more room? Fit as many singles and double combinations as you can as long as you measure for a minimum of 74" each booths and table set.

How Many Booths and Tables Fit in Your Space

Using the standard booth size of 48" which fits 2 people per booth, the chart above will give you a good idea of how many booths and tables you can fit in your space and how many people you will be able to accommodate. This chart is a measuring guide and may change depending on the visitor's size. The measurements above are industry standard and are common in many dining areas. In some cases you can push booths further or bring them closer from each other but this may change the comfortability of your seating area depending on the visitors preference.

Send us any inquiries you may have regarding booth spacing and will will do our best to help.